Is The Internet Finally Sick Of PewDiePie's Marina Joyce Jokes?

As hardcore watchers of the PewDiePie channel, even we're feeling uncomfortable.

In case you're not an avid viewer of the PewDiePie channel, let us break this situation down a little bit for you; ever since Marina Joyce shot to fame with the Twitter trend #SaveMarinaJoyce, in addition to her questionable behaviour and potentially dangerous fan meet-ups, she's been the conversation on everybody's lips. However, it looks like Felix is covering the news with more jokes than necessary.

We all know Felix only became the most subscribed YouTuber on the planet based on his innovative content and unique sense of humour, but is it possible that even the PewDiePie channel has taken the Marina Joyce jokes one step too far? We dive into some of the reasons why it might be time to stop parodying Marina in practically every single one of his videos.

It's WAY too soon.

All of the media attention surrounding Marina happened approximately a month ago. In the grand scale of the universe, this means nothing. However, for people with concerns for Marina's health and wellbeing still at the forefront of their minds, watching Felix relentlessly mock and attack her may be a little hard to stomach.

There's no time it will ever be right to parody or imitate another YouTuber for the sake of laughing "at them", but some fans personally feel like Felix has overstepped the boundary in taking down a YouTuber so innocent in all of this madness. By changing his social media profile images to be that of Marina and broadcasting video titles "MARINA JOYCE EXPOSED" to his near 48 million subscribers, one has to wonder why Felix is gunning so hard for the vlogger.

@pewdiepie wow youre so desperate???????

One of the most shocking conversations to happen when Marina Joyce hit viral fame was whether she was actually in danger. This rumour was quickly dispelled after her mum came forward to clear her daughters name, but fans still expressed a great deal of concern regarding her bruises and potentially even her mental health.

Because of this, some people have found Felix's portrayal of Marina's mannerisms and behaviours to be rather offensive. Thankfully, in one video, he does call out BooHoo for sponsoring a fashion haul video with Marina, but this doesn't seem to stop PewDiePie from imitating her voice, actions and editing styles. If Marina truly is unwell, this makes Felix more of a bully than a comedian. These jokes in particular need to stop.

PewDiePie has a HUGE amount of influence.

Unless you glazed over one of our sentences earlier, let me repeat this for you - Felix has nearly 48 million subscribers. This is not only more subscribers than anyone else on YouTube, but potentially one of the biggest social media influences on the planet, after y'know, the Kardashians. Whilst we're still waiting to find out what Felix's "core message" will be, should he really be joking about a controversial viral star instead?!

Sure, before PewDiePie started talking about Marina, the entire world was already. But technically, Felix hasn't added anything to the debate aside from suggesting that her cat is a robot and that she's not a *real* Buddhist - so why does he continue to parade her image across his own branding?

Some people believe that Felix has had a total change of heart when it comes to his content creation, with it being more entertainment driven and less video game heavy, but on the other hand, some fans are beginning to rebel against his "hot takes" and constant need to weigh in on YouTube drama and community beef. His "MARINA JOYCE EXPOSED" video is just further proof that Felix can't stay away from a trending topic.

Internet humour is fickle and fleeting (basically, the joke is old).

Can you remember when Chewbacca Mom was the world's hottest trend? Or when we couldn't get enough of the Damn Daniel kids? Yeah, fame disappears rather quickly on the Internet, and with it goes the humour. So it comes as no great surprise that as soon as Felix started making jokes about Marina in his videos, it almost immediately stopped being funny.

Excuse me for predicting the future here, but even though we're all loving the Harambe memes right now, there will come a time where people are being called out for continuing the joke and disrespecting the memory of a poor gorilla - it's a horrible metaphor, but Marina is in the same situation. Whilst her health and wellbeing should never been placed used for comedic effect, the freedom of speech on the Internet helped other people make it so - but it seems like some creators aren't ready to move on.

After Felix posted his explicit "MARINA JOYCE EXPOSED" video, he seems to have calmed down on the Marina front with only a few references to her behaviour in the form of hand hearts and strangely short sentences. The tweet below was cleverly caught out by a fan, but will it be the only time PewDiePie mocks Marina on social media - don't forget he even briefly changed his YouTube avatar to her face as well. 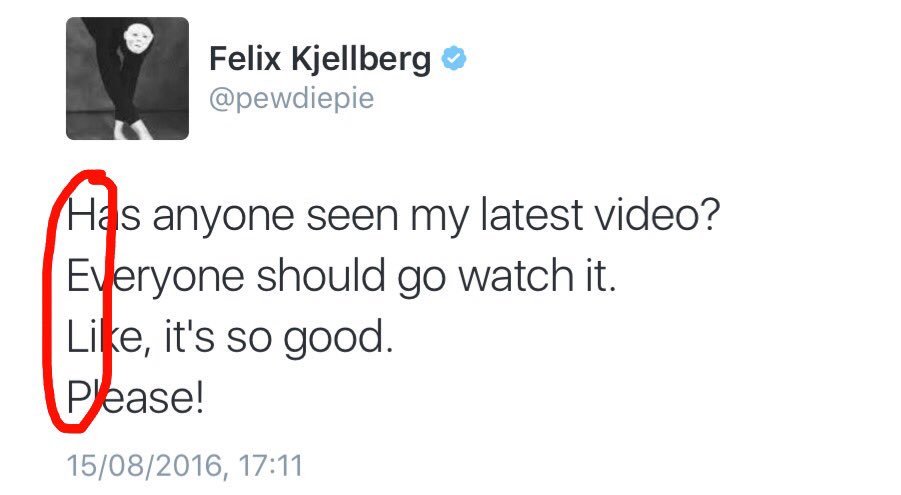 It's a blatant way to score Felix more clicks/ad revenue.

YouTube is facing its own postmodern era at the moment with creators becoming acutely aware of how they're all interacting with the platform - just look at all the videos calling out clickbaiting and drama channels. Not a day goes by without YouTubers jumping on popular trends, eager to try and get a quick click from a new audience, so it came as no surprise that Felix ran with the Marina Joyce hype.

Whilst his channel regularly focuses on video games and his distinct personality, some of his recent videos (he even admits himself) seem to concentrate more on calling out other YouTubers such as Keemstar and Leafy, or parodying more vulnerable creators like Sorsha and Marina. It begs the question; Has the biggest YouTuber on the planet succumbed to the need to name drop for clicks now?

Think about it this way - if you don't care about video games, you won't watch a PewDiePie video, but if you see someone taking the p*ss out of other YouTubers and stirring up controversy, just about anyone would click. It's a shame that YouTube culture has fallen into this uninspired trap, and it's even more upsetting that creators such as Marina have been dropped down because of it, but hopefully there will be an enlightenment soon as we can all move on happily from this dark time.

Really though, what did Marina do to deserve this?

As previously mentioned, Felix has attacked the likes of Keemstar and Leafy in his videos. Whilst we do not support the idea of bullying or harassment, these creators certainly invite negative attention with the controversial and hateful videos they create about the community. On this train of thought though, just what exactly has Marina done to deserve the PewDiePie treatment?

After a vegan YouTuber called Felix out as the "dumbest person on YouTube", Pewds reacted swiftly and properly, shutting her down in the process. On the flip side, Marina has never done anything to offend PewDiePie or his brand - so why did she get an entire video dedicated to embarrassing her and the way she acts? If anything, Marina was seemingly innocuous to Felix and everyone else in his personal community, so what's up with all the jokes?!

why is everyone so judgemental about me? its actually so sad to see people become hateful towards me for no reason, like wtf? im so kind :/

But what do you think? Has PewDiePie taken his jokes one step to far, or was Marina Joyce free comedy material for anybody to use? Let us know in the comments below! If you want to know what else is happening on YouTube this week, make sure you subscribe to our YouTube channel and watch the most informative news series on the Internet - SLAY or NAY!