The Rise And Fall Of Sam Pepper

Back in the old days, when life was simple and the harvest was bountiful, Google (who own YouTube) would hold meetings for YouTube creators with a certain amount of subscribers. Here they would (and may still) give tips for making videos more engaging and encourage everyone to get to know each other and collaborate. It was at one of these meetings that I first met Sam Pepper. There are two things you need to know about Sam. The first is that he is pretty much exactly what he seems like. The Sam you see in the videos is not (for better or worse) a character, it's all him. He's quirky and definitely a unique human being.

The second thing you need to know about Sam is that almost every popular British YouTuber got where they are today by collaborating with Sam. It's a fact many would like to forget, but it happened. There was nothing wrong with that. At the time, Sam was just a strange dude with a lot of subscribers - it was only in recent years that he started his steady and baffling course of unnecessary self-destruction. Alfie collaborated with him, Zoella did - even I did (though in hindsight I'm not proud of it). He was a big deal - so where did it all go wrong? That's what we'll find out in this article.

This article will deal with Sam Pepper as a YouTuber. I obviously cannot discuss his story without touching on the sexual assault allegations that were made against him, but I do not feel that I know enough about those accusations, nor am I generally qualified enough to comment on them in any meaningful way. I mention the allegations because they need mentioning, but they won't be the focus here. I'll leave the discussion of those events to those that may have been involved, those who know the law and for you to make your own mind up. If you're looking for information about that facet of his life, you can look here.

When Sam Was The New CharlieIsSoCoolLike

Sam Pepper came onto the YouTube scene right as the 'British Invasion' of YouTube was beginning. YouTube, which had traditionally been dominated by American comedy, had begun falling in love with British guys with nice accents and neat hair. Sam was perfectly poised to ride that wave straight to Subscriber Town. He had a cheeky English charm, offbeat fashion sense and - to give him credit - he was doing prank videos before prank videos reached peak saturation (and then started 'Going Wrong!!!' and 'Going Sexual!!!!'). 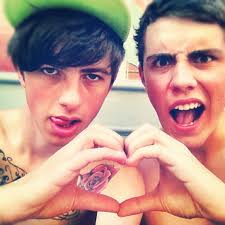 It's strange to imagine it now, but he was a key member of the British YouTubing squad. Everyone wanted to collaborate with him and everyone did. I made two videos with him (I've had a channel for about five years) and I was excited to do it, because back then this guy was hugely popular - and only getting more so. A simple Google search will show you that people were making Sam fan art and writing Sam fan-fiction and shipping him with certain female YouTubers just as keenly as fans do now with YouTubers like Joe Sugg or Marcus Butler.

Then Came The Self Destruction

The most fascinating thing about Sam's downfall is that it is all his fault. What I mean is - it wasn't through some mistake that he turned people against him, it was his own deliberate, concerted efforts that drove people to dislike him. The groping prank, the murder prank, these were all Sam's idea and they made everyone hate him. Sam was a very popular internet star before he started doing all this insane stuff, then - for reasons perhaps no one could understand but him - he decided to risk it all. Maybe he thought he was too big to fail - and that he could do whatever he wanted. Maybe he just really, really wanted YouTube views.

It is incredible to see how far he managed to fall. What's bizarre is that his videos became more and more obviously desperate attempts to stay well-known and popular - but he was well known and popular. He has over 2 million YouTube subscribers (at the time of writing), he has 1 million twitter followers - this is not someone that needed to start doing clickbait harassment videos (not that anyone needs to - but you catch my drift). He didn't need to take desperate measures, but he did - and oh boy has he paid for it.

One Step Too Far

Sam's 'Murder Prank' was the final straw. I'm sure this came as no surprise to him, as at that point he had seemingly embraced his position as the internet's top troll (second perhaps only to this lovely lady) and was completely just playing into that role. We all knew he just trying to get everyone mad, it was obvious. That's why we never linked to the video when we wrote about it here on Unicorns - we weren't going to give him free views.

In many ways posting that video was actually his goodbye message. He must have known that nothing good could have come from it - perhaps that was his way of going out in a blaze of troll glory. No matter what, it is clear that he sealed his fate. The internet had had enough and the once enormous YouTube star that everyone clamoured to make videos with had no supporters left.

Is He Actually Gone? Probably Not

Let's be honest, Sam has not got a good history of letting things lie. Nor has he got a good history of keeping quiet. Sam was born to be in the limelight - it's all he knows how to do. It's why he went on Big Brother, it's why he's kept his channel going as long as he had and has reinvented himself so many times. Sam is going to end up coming back, but what's less likely is whether anyone will be interested in his antics any more.